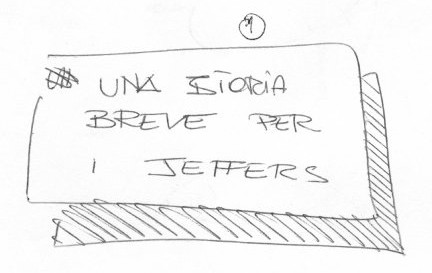 “Clearly, to turn these sketches in a real project, there would be the need of lot of works. But I do not despair. I am still in contact with Chiara. Sooner or later we will find a window, convenient for both, and we will make it”.

This section shows some sketches Daddo made while ago. It was 2014/2015, Daddo was often collaborating with  a good friend in Italy Chiara Graziani. Chiara is a Psychologist of young children. For a while Chiara and Daddo tried to use the Jeffers, a strange kind of potato with seven legs, one arm and a tail, as a tool to help children to bring out their fears. The character itself was, actually, invented by Laila. Daddo’s daughter at the age of 4. This is the first sequence. Rather than starting representing “fears”, as planned, they started representing “empathy” and “kindness”. Unfortunately the project never sow the light. Still… it is one of those that, for Daddo, meant the most.